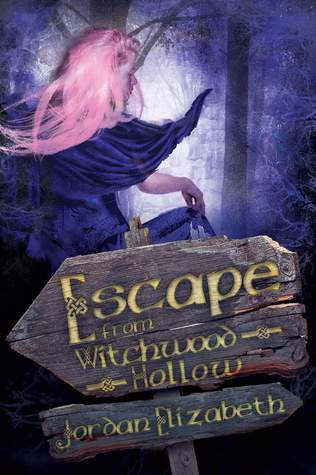 Escape from Witchwood Hollow by Jordan Elizabeth is a YA fantasy novel. Elizabeth introduces us to Honoria, a fifteen year old who lost her parents in the 911 attacks. Along with her brother Geoffrey and aunt and uncle, they leave New York City and the tragedy behind to settle in the small upstate community of Arnn. Arnn holds many secrets and legends. Witchwood Hollow is one such legend. It is said that anyone who wanders in never returns because of the witch who lives in the woods. Honoria and her new friend Leon set off to uncover the truth of Witchwood Hollow, finding more than just a legend.

This novel is told in three time periods – the 1600s, the 1800s, and 2001 – and weaves together a story  of family histories, lost loved ones and reunions. The story begins in 2001 with Honoria and her family’s arrival in Arnn. Then switches to the 1600s where Lady Elizabeth Clifford, the witch who, accused of murder, stumbles into the woods and makes it her home. It continues in the 1800s with Albertine who travels from England to live with her father in Arnn, but gets lost and trapped in the woods. Other characters are woven throughout and add richness to the tale. The story then switches back and forth between these time periods as it unfolds to reveal a deranged witch, a vengeful curse of sorts and the need to save all of Arnn from the witch’s control.

I really enjoy the plot of this novel. It is original, entertaining and keeps you guessing until the very end to figure out how everything ties together.  All of the characters are well-developed and distinctive. Elizabeth does a great job of keeping all of their personalities separated and original. The settings, especially Witchwood Hollow, are descriptive and well-written.

The only problems I had with the novel are 1) not being able to like the character Honoria at the beginning of the novel. She is snobbish and a bit glib in her interactions with others and reminded me of people I’ve avoided most of my life. However, during the course of the novel, I grew to understand her and like her more, especially after she begins to interact with Leon. And 2) I wasn’t overly impressed with all of the clothing descriptions in the 2001 parts of the book. I do understand why they are there – a city girl comes to the country and there is the need for distinctions to be made between the previous lifestyle and the current one she is living in. These two issues only barely detract from the great story being told.

If you enjoy paranormal stories with witches, then you will definitely find this novel entertaining. It is not your usual witchy story and that makes it a step above other novels with similar themes.

John 3:16 NIV For God so loved the world that he gave his one and only Son, that whoever believes in him shall not perish but have eternal life